Third Final of the Season! But Title in Montreal Goes to Giorgi 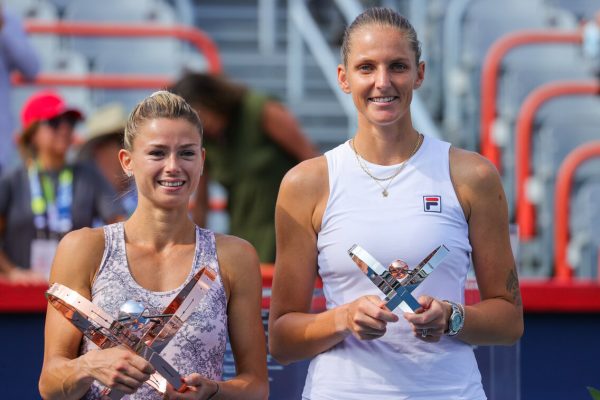 Karolina finished the tournament in Montreal with a final appearance against the Italian Camila Giorgi. However, she didn’t succeed in her last match at the Bank National Open and after losing 3-6, 5-7 she only received the trophy for the defeated finalist.

Giorgi has been doing well in her matches against Karolina recently and she entered the final in Montreal with confidence as well. The key game of the first set came at 3-2, when Karolina had two break points, but the Italian managed to save both of them and subsequently broke Kaja’s serve. Giorgi then grabbed the first set thanks to her vigorous, error-free play.

The Italian had the upper hand in the second set as well, but Karolina managed to pull back from 1-3 to 3-3 and the match was even until 5-5. Then the courageous Giorgi succeeded again, first by saving her serve and then capitalizing on the second match point in the last game to triumph.

“She played really solid tennis, she served well in important moments. She was simply a little bit better. It’s hard to play against players like her, because you have one or two chances and if you don’t capitalize on them, you don’t get any more. I think she deserved to win. But I am satisfied with my week in Montreal,” Kaja commented on her performance at the traditional Canadian tournament.

Although Carolina finished just below the top in Montreal, she played some excellent matches at the event. Especially in duels with Sara Sorribes and Aryna Sabalenka she played a varied and absolutely convincing tennis.